Warning: ob_start(): output handler 'ob_gzhandler' conflicts with 'zlib output compression' in /home/robev/public_html/blog/wp-content/themes/robbiewolfe2/header.php on line 7
 Robbie Wolfe | WebGL Board game 
Warning: "continue" targeting switch is equivalent to "break". Did you mean to use "continue 2"? in /home/robev/public_html/blog/wp-content/plugins/jetpack/_inc/lib/class.media-summary.php on line 69

Warning: "continue" targeting switch is equivalent to "break". Did you mean to use "continue 2"? in /home/robev/public_html/blog/wp-content/plugins/jetpack/_inc/lib/class.media-summary.php on line 79

Warning: count(): Parameter must be an array or an object that implements Countable in /home/robev/public_html/blog/wp-includes/post-template.php on line 284 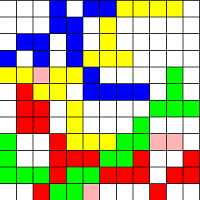 There is a four player strategy board game I really like to play, and I couldn’t find an online version of it. I decided last year it would be a fun challenge to implement it myself. I recently added it to the programming section of this site. It was my first attempt at making a WebGL game.  The game’s nature led to some difficult logic challenges. For example, to determine when a player’s game was over, I had to compute if they had any remaining moves. This was harder than it seemed, and was an interesting challenge. The game can be downloaded and played in a WebGL compatible browser here. There you can also read the game rules and view source code commit history.